Grayson Perry - The Tombstone of the Unknown Craftsman, British Museum

Having spent the last two months trying to convince my fellow classmates, that I was not mad - after presenting a giant18m tall pink teddy bear as my first project (see other blog) -  the Grayson Perry exhibition - 'Tomb of the Unknown Craftsman' presented a welcome opportunity to move down the table and pass the Mad Hatter back his hat. Essentially a selection of various crafted works selected by the artist from the British Museum archives, juxtaposed with the artists own work (which he has created using similar ancient craft techniques and materials), the exhibition is a celebration and personal exploration of all in which the artist finds inspiration  In-essentially the exhibition is a open book of the artists own mind, - a world largely ruled still by his own childhood ideas, focusing around Alan Measles - a 50 year old teddy bear, presented by the artist as a  'god' and 'fierce dictator'. 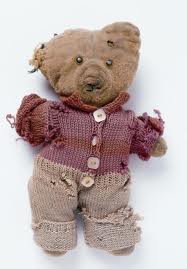 As an exhibition overall, I found it highly enjoyable. I particularly admired the shear courage the artist had in using his own childhood ideas as a concept, and the level of detail in the narrative he adopted in carrying it through all of his work. To me, the use of a teddy bear - the eternal symbol of childhood- was a particularly clever choice in creating an emotional link of the exhibition with his audience. Childhood represents different things for different people: happiness, sadness, loneliness, and thus produced an instant reaction in those viewing his work - although one (that I have found in my own work, which often deals with 'fun' concepts) had sadly worn a little thin by the end of the exhibition.

Reading from the British Museum website, the synopsis for the show stated that the exhibition aimed to 'inspire people to take their inner life more seriously', and in doing so, take our 'real life' less seriously - an idea I strive to promote in my own work and we could all learn from I think. The artist encourages us to take some time to self reflect, play, imagine, and think about the things in life that are really important to us - from love right through to sexual fantasy, by highlighting the obscenity of 'real life' and encasing it in his work. He uses humour and sacasam throughout the exhibition, to flag up what are real concerns for him and his audience - the loss of religion, the oversexualisation of society, and commercialization of the world - in a way that, unlike other artists, feels to me extremely humble and accessible. With Perry, it feels like there are no complicated hidden meanings - everything is exposed to view.

As an exhibition of artwork, this show enabled Perry to truly prove his skill as an artist - showing his considerable talent for adopting new techniques and carrying them out in his work to an incredibly high standard. However, although aware of Grayson's background as a potter, the exhibition could have perhaps done with a little less pottery, which seemed to dominate. His lack of inhibition in his uses of colour and decoration in his pieces, was particularly inspiring in encouraging me to be more bold in my own design work. As a creative myself, the exhibition gave me that push I needed to accept my own crazy ideas and thoughts and run with them rather than be ashamed of them - whats a piece of work without a phallic reference, a teddy or a rainbow, eh? I'm sure for countless others it will do the same.

Perry, Ill be needing that hat back please.

To see more about this exhibition
http://www.youtube.com/watch?v=wsgfNfXwPs0

A few words, and a little bit of detail about various exhibitions, lectures and books I have attended and read.

carmamasson
A Part II architecture student currently studying at the University for the Creative Arts in Canterbury, UK